The UK base rate may be stuck at 0.1%, but there is interest rate movement elsewhere. 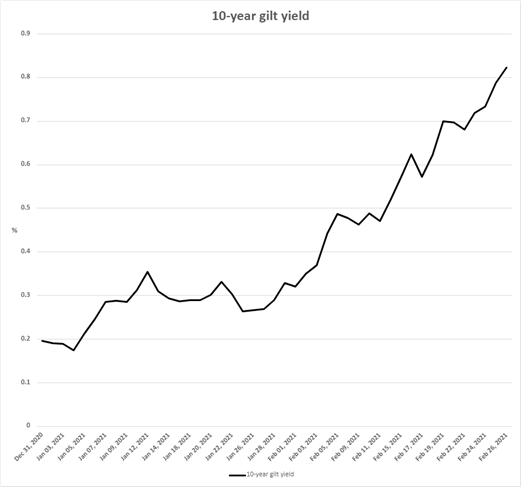 The base rate set by the Bank of England and its central bank counterparts in the US, Eurozone and Japan are the rates that grab the headlines, but there are many other interest rates in the investment world. Base rates are essentially short-term interest rates, but what is more relevant for many major investors, such as pension funds, is long-term rates.

While central banks largely control short-term interest rates, it is investors who determine long-term rates by the prices they are prepared to pay for fixed interest securities (often called bonds). As a result, base rates and long-term interest rates can follow distinctly different paths.

The first two months of 2021 gave a perfect illustration of how great the divergence can be. The interest yield on 10-year government bonds (gilts), a widely used benchmark, more than quadrupled in the UK from 0.196% at the start of the year to 0.823% at the end of February. Across the Atlantic, the yield on 10-year US Treasury bonds also jumped, from 0.916% to 1.407%. In both instances base rates were unmoved. There were various reasons put forward for the upward movement, but many focused on investors’ fears that inflation could pick up as economies recovered from the pandemic.

A rise in long-term rates can influence share prices. A higher long-term interest rate means that future profits – particularly those well into the future – are worth less today. That principle could mean a sharp drop in the value of some technology companies, particularly those promising jam tomorrow, but currently making little or no profits.

The move in long-term rates may prove to be blip, but it serves as a reminder that your investments need to be kept under review, even if nothing appears to be happening to base rates.

The value of your investment and the income from it can go down as well as up and you may not get back the full amount you invested. Past performance is not a reliable indicator of future performance.

Investing in shares should be regarded as a long-term investment and should fit in with your overall attitude to risk and financial circumstances.