Quantitative tightening: a reversal of fortunes?

One of the defining financial strategies of the last 13 years – quantitative easing – is about to go into reverse.

The Bank of England will slowly trim its £9 trillion portfolio throughout 2022, but only time will tell when it comes to the impact on personal investments. 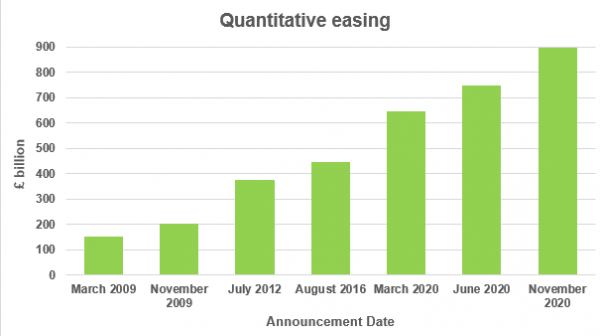 What happens when the biggest buyer in a multi-billion-pound investment market stops buying… and then starts selling?

We are all about to find out, and the answer could have surprising ramifications for your investments and the UK economy in general. The buyer in question is the Bank of England and the market concerned is the £2.134 billion C gilts market, where the bulk of the government’s borrowing is undertaken.

As long ago as March 2009, in the backwash from the global financial crisis, the Bank of England started to buy gilts (government bonds), financing its purchase by a process known as quantitative easing (QE). To many outsiders and some experts, the whole operation looked suspiciously like money-printing as the Bank electronically ‘created’ the cash which paid for its gilt purchases.

The rationale behind QE was that by injecting money into the economy and buying up bonds, QE would help boost spending in the economy and push down interest rates. The UK has not been alone in using QE with these goals in mind – the central banks of the US, Eurozone and Japan have all done the same.

The extent to which QE worked is the subject of much learned debate. Unsurprisingly, the Bank believes it has – it could hardly say otherwise given that it has run seven separate rounds of QE. On the other side of the fence are those economists who say that all the money – nearly £900 billion – that QE pumped into UK plc has inflated asset prices – such as house values – and distorted investment markets.

Which view is right may become clearer during 2022 because the Bank of England has announced that QE will be going into reverse and becoming quantitative tightening (QT). Instead of buying gilts, which was especially helpful for the government during the pandemic, the Bank is now going to begin selling its portfolio and destroying that electronically created cash. It will be a gradual process – after all the Bank currently owns about 40% D of the entire gilts market.

As the Bank of England moves from QE to QT, now would be a good time to review your investments in preparation for a world where the demand for government bonds is shrinking, just as supply is increasing.

The value of your investment and any income from it can go down as well as up and you may not get back the full amount you invested. Past performance is not a reliable indicator of future performance.

Investing in shares should be regarded as a long-term investment and should fit in with your overall attitude to risk and financial circumstances.