New reforms set to simplify divorce in England and Wales

Divorce will become easier thanks to a change in the law from 6 April, but even with a more amicable split, financial advice is still vital.

Divorce rules in England and Wales will soon undergo their most radical reform since the introduction of the Matrimonial Causes Act 1973. The Divorce, Dissolution and Separation Act became law in June 2020 and was due to be implemented last autumn. B However, in June 2021, the Ministry of Justice announced a delay to ensure its systems were fully functional from day one. C

The new divorce law will scrap the requirement for one spouse to make accusations about the other’s conduct, such as ‘unreasonable behaviour’ or adultery, or for couples to otherwise face years of separation of up to five years (without consent) before a divorce can be granted – regardless of whether the couple has made a mutual decision to separate. The conduct requirement encouraged a blame game if the object was to achieve a quick divorce.

In 2020, the most common reason for divorce among opposite-sex couples was ‘unreasonable behaviour’, which accounted for nearly half of petitions from wives and about a third from husbands. 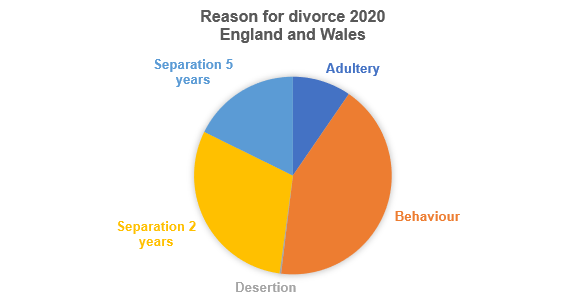 The new regime replaces questions of behaviour and separation with a single requirement that one (or both) parties to a marriage make a statement of ‘irretrievable breakdown’ of the marriage. If only one spouse makes the petition to the court, the other cannot contest it – the statement alone is sufficient evidence. In practice, very few divorces – less than 2% D – have been contested, but those where couples argue in court tend to grab the headlines.

The new law sets a 20-week period between the commencement of proceedings and the court granting a provisional decree of divorce (decree nisi) which becomes final six weeks later. To quote the Ministry of Justice, the 20-week gap ‘…will provide a meaningful period of reflection and the chance to turn back, or where divorce is inevitable, it will better enable couples to cooperate and make arrangements for the future.” D

While the new law makes divorce easier and potentially less confrontational, it says nothing about the financial structure of the divorce settlement. This will remain an area where professional advice is vital, particularly when the complexities of pension rights are involved.

The value of your investment and any income from it can go down as well as up and you may not get back the full amount you invested.