The first Budget of 2017 in March hit a serious obstacle when the Chancellor attempted to raise national insurance contributions (NICs) for the self-employed. This time around he was subtler in his approach.

When Mr Hammond announced an increase to Class 4 NICs in the spring Budget, partly to offset the end of Class 2 contributions from April 2018, it nearly cost him his job. His backbenchers and the popular press rose up against this new imposition on white van man and his ilk. Within a week the Chancellor had backed down.

This autumn the government adopted different tactics. In a written statement issued three weeks before the Budget, the Exchequer Secretary to the Treasury announced that the proposed National Insurance Contributions Bill would be delayed until 2018, with the result that the abolition of Class 2 NICs (currently £2.85 a week) would be deferred for 12 months. The net effect may have been an increase in NICs for the self-employed, but there was barely a murmur in the press.

In his Budget, the chancellor added 10p a week to the Class 2 rate and raised the upper threshold for the full NICs rate for the self-employed (and employees) by £1,350. The net result is that in 2018/19 the self employed will pay more NICs than under the spring Budget plans if their income is less than £23,764 (but at least £8,424).

If you are a higher rate taxpaying employee, then typically your NIC bill will rise by about £104 a year, cancelling out almost a third of your income tax savings from the increased personal allowance and higher rate threshold, as the example below shows. 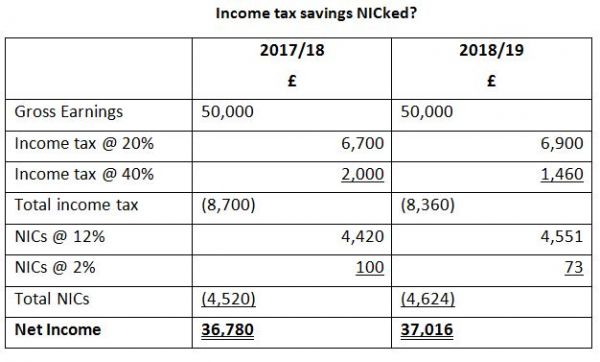 NICs are an income tax in all but name. In some circumstances, such as salary sacrifice for pension contributions, this can be turned to your advantage. To find out more, please talk to us.

The value of tax reliefs depends on your individual circumstances. Tax laws can change. The Financial Conduct Authority does not regulate tax advice.