The pressure is dropping on inflation

UK inflation is falling faster than expected, as the March figure for the Consumer Price Index (CPI) was 2.5%. 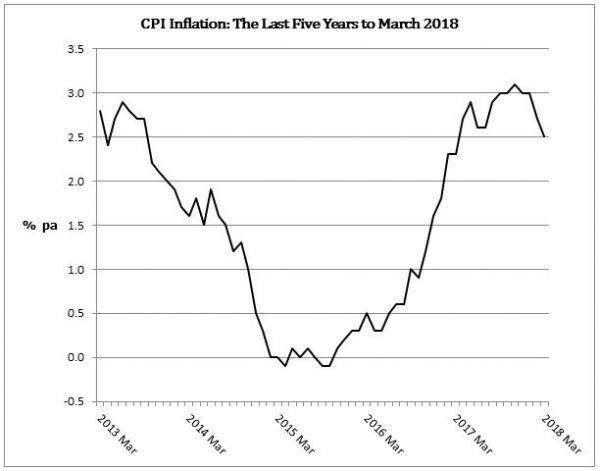 This March figure, published in mid-April, surprised forecasters, who had predicted annual inflation would remain at 2.7%, as in February. That February figure was itself a surprise, as the forecasts had predicted 2.8%.

The drop for March may be the result of one-off factors, so it should be treated with caution. One issue is the way individual categories can distort the final figure. In March, alcoholic drinks and tobacco saw the sharpest drop price – from 5.8% to 3.5%. These both saw two sets of tax increases in 2017, because of the double Budgets, whereas in 2018, the Chancellor moved to a Spring Statement and did not change any taxes. It was the classic one-off.

The unexpected drop prompted debate about whether the Bank of England would raise the base rate on 10 May. However, there is still a large gap between what can be earned on short term deposits and inflation, whether or not the base rate rises.

Despite inflation falling, you are steadily losing purchasing power if you are holding more cash than you need on deposit – even before the tax impacts are considered. The onus is still on investors to invest to protect the real value of their capital.

The value of your investment can go down as well as up and you may not get back the full amount you invested. Past performance is not a reliable indicator of future performance.