The dust settles on a turbulent February for global stock markets

On Friday 2 February, after most of the world’s stock markets had finished for the week, the Dow Jones Index dropped by 666 points in a day. Never mind all the beastly connotations of that number, in fact it was a drop of about 2.5%. The professional’s measure of the US stock market, the S&P 500, fell 2.1%.

As might be expected, the following week was unsettled, with the Dow losing over 1,000 points on both Monday and Thursday and other global equity markets experiencing similar shocks.

There were a variety of suggestions about the sudden return of volatility to a market which had spent the previous year seemingly asleep. Some blamed monthly figures released on 2 February showing higher than expected US wage growth of 2.9% C. These were read as a possible inflation threat, that would prompt a more rapid rise in interest rates. The fact that such monthly figures are notoriously volatile was, for once, ignored.

Markets recovered their poise in the following weeks. However, the press’s attentions had moved on: a large fall always gains more attention than a similar rise, especially if the rise is more gradual. For long-term investors, the big picture can therefore be lost in the noise of short term headlines. For example, the performance of the main indices in the first two months of 2018: 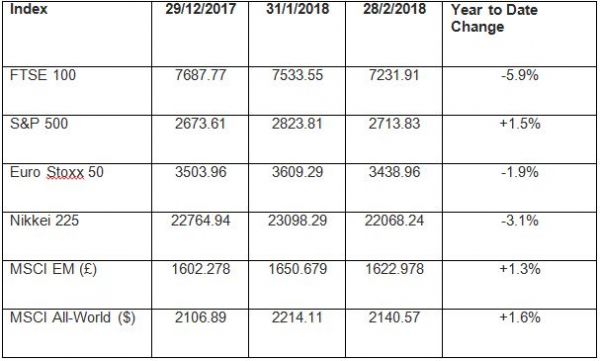 From a global viewpoint, as measured by the MSCI All World Index, what happened in February did not fully undo the increases in January.