Mr Carney prepares to write a letter as inflation rises

The May inflation data came as a surprise to many pundits. The expectation had been for inflation, as measured by the Consumer Prices Index (CPI), to remain at April’s level of 2.7%. Instead, National Statistics revealed that the annual figure had reached 2.9% (3.7% on the Retail Prices Index yardstick). 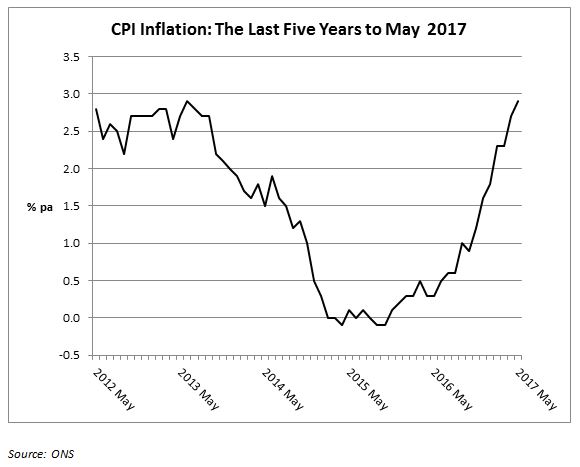 The last time inflation was at this level was June 2013, as the graph shows. Since then it has taken a rollercoaster ride to around zero for much of 2015, only to surge upwards in the past year: in May 2016 CPI was just 0.3%.

At 2.9%, inflation is already above where the Bank of England had been expecting it to peak later this year. If the rate adds another 0.2% next month, then Mark Carney, the Bank’s Governor, will have to write a letter to the Chancellor explaining why the inflation target has been missed by more than 1%. It’s already clear what he would say from statements issued recently by the Bank: blame the fall in sterling since the Brexit vote.

The Bank sees little respite in the short term. In the press release issued in June alongside its interest rate decision, the Bank said inflation “is likely to remain above the target for an extended period as sterling’s depreciation continues to feed through into the prices of consumer goods and services”.

With many deposit accounts paying interest rates of under 1% (before tax), the news is a wake-up call if you’re holding more cash than you need to. A year ago money on deposit was just about keeping pace with price increases, whereas now it’s losing buying power at the rate of about 2% a year. To discuss your options in the renewed battle against inflation, please get in touch.