Is a return to inflation on the cards?

December’s inflation figure was the highest since July 2015. 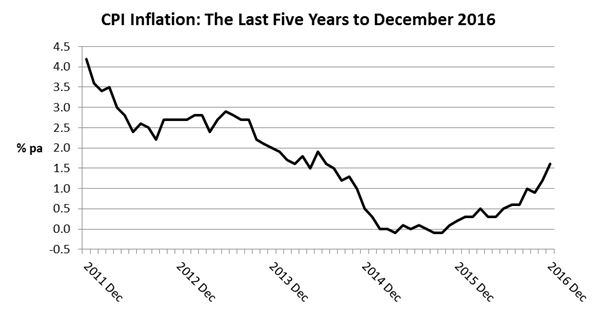 For much of 2015, inflation barely existed. On the government’s chosen measure, the Consumer Prices Index (CPI), annual inflation oscillated between 0.3% and -0.1%. 2016 was a rather different story: the starting point was 0.3%, but by December prices were rising by 1.6% a year.

The sharp rise over the year is mainly the result of the weakness of the pound since the Brexit vote and rising oil prices – it is easy to forget that we started 2016 with supermarkets selling petrol at 99.9p a litre and diesel at 99.8p. Looking ahead, there is general agreement that inflation will continue on an upward path. The Bank of England’s most recent inflation report estimated 2017 would end with inflation at 2.7% and not return to its 2% target until 2020. Some commentators are more pessimistic.

While the latest figures show that food prices are still falling year-on-year, the other eleven categories making up the CPI are all now in positive territory, as they have been since October. One indicator of what is coming down the line is that prices for materials and fuels paid by UK manufacturers for processing (so-called input prices) rose 15.8% in 2016.

The re-emergence of inflation is unlikely to mean any immediate rise in short term interest rates. The Bank of England has so far expressed the view that it will “look through” an increase stemming from external factors beyond its control, such as oil and currency volatility. For investors, the message is one that should never have been forgotten: when considering investment returns, strip out the effects of inflation. A 2% interest rate represents a loss if inflation is running at 2.5%.