September inflation was just low enough to spare Mark Carney writing to the Chancellor. And helped spur the first interest rate rise in a decade. 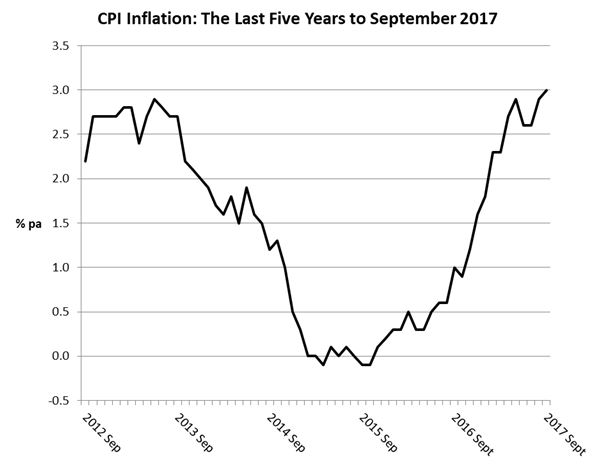 Each year the UK Chancellor of the day gives the Bank of England an inflation target to meet. Ever since Gordon Brown changed the inflation index used to the Consumer Prices Index (CPI), that target has been 2%. The Bank is given a leeway of 1%, so provided the annual CPI figure is between 1% and 3%, it is deemed to be meeting its target.

Once either boundary is crossed, the Governor of the Bank of England must write a letter to the Chancellor explaining why inflation is off target. Three months’ later the Governor must repeat the process unless inflation has returned to its allotted corridor.

Some economists thought that last month that the Governor, Mark Carney, would be picking up his pen to explain to Philip Hammond why inflation was running at over 3%. It would not have been Mr Carney’s first letter – as the graph shows, he has also had to exercise his correspondence skills in explanation of a sub-1% rate: the last of those letters was sent at the end of 2016.

In the event, Mr Carney’s pen was unused, but by the thinnest margin possible as the figure hit 3%. Even the Governor now thinks that the next CPI number will see his letter-writing resumed. That is one reason why the Bank decided on a 0.25% interest rate increase at the beginning of November. What happens next is less clear. The Bank expects inflation to decline gradually as the impact of the pound’s post Brexit fall disappears from annual comparisons. However, the Bank’s latest Quarterly Inflation Report sees inflation only back at close to 2% by mid-2020, conditioned on a gently rising path of Bank Rate”.

The November rate increase was accompanied by a statement that the “any future increases in Bank Rate would be expected to be at a gradual pace and to a limited extent” In other words, should you be hoping that deposit interest rates are going to catch up with inflation, you could have a long wait. If you are holding larger sums on deposit than required for your rainy day needs, talk to us about your other options.