The slow climb of US interest rates, a quarter percentage at a time...

The US central bank increased interest rates again in December. 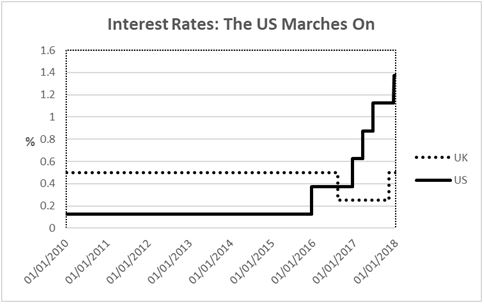 While the Bank of England managed just one interest rate rise in 2017, to end the year at 0.5%, its counterpart in the US notched up three increases, finishing at 1.25%-1.50%. The trio of Federal Reserve increases were all well telegraphed, so much so that by the time each arrived, the focus was on when the next 0.25% addition would occur.

That was the case with December’s increase, the last overseen by Janet Yellen as Chair of the Federal Reserve before Jay Powell, the Trump nominee, takes over. The conclusion from the analysts who delve into the Fed’s reports is that three rate increases are expected in 2018. However, the composition of the Federal Open Market Committee, which makes the interest rate decision, will be changing significantly in 2018, so this number is by no means set in stone.

On this side of the Atlantic, the year ended with the news that November’s CPI inflation had reached 3.1%. That is just (by 0.1%) enough to force the Governor, Mark Carney, to write an open letter to the Chancellor explaining why inflation is above its target range. Even so, the Bank of England looks unlikely to match the Fed’s rate-raising zeal in 2018. In December, the Bank repeated its familiar mantra that “Any future increases in Bank Rate are expected to be at a gradual pace and to a limited extent.”

A backdrop in which rates in the US are pulling away from those in the UK and Europe (which are still at 0% within the Eurozone) could create some tension in investment markets in 2018. If you have not undertaken a New Year review of your portfolio, now is the time to talk to us.